This an extract from Scott sanders piece in the Boston Globe. You can read the full article here:

“…Amelia is many things. But she’ll never take a sick day, join a union, or waste time on Facebook on the job. Created by IPsoft over the past 16 years, the AI system learned how to perform the work of call center employees. She can learn in seconds what takes humans months to master, and she can do it in 20 languages. Because she’s able to learn, she’s able to do more over time. In one company trial, she successfully handled one of every 10 calls in the first week, and by the end of the second month, she could resolve six in 10. Deploy her worldwide, and 250 million people can start looking for a new job.

Viv is an AI coming soon from the creators of Siri who’ll be our own personal assistant. She’ll perform tasks online for us and even function as a Facebook News Feed on steroids by suggesting we consume the media she’ll know we’ll like best. With Viv doing all this for us, we’ll see far fewer ads, and that means the entire advertising industry — that industry the entire Internet is built upon — stands to be hugely disrupted.

A world with Amelia and Viv — and the countless other AI 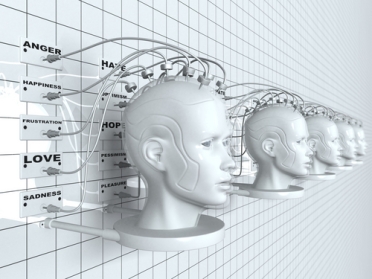 counterparts coming online soon — is going to force serious societal reconsiderations. Is it fair to ask any human to compete against a potentially flawless machine in the next cubicle? If machines are performing most of our jobs and not getting paid, where does that money go instead? And what does that unpaid money no longer buy? Is it even possible that many of the jobs we’re creating don’t need to exist at all, and only do because of the incomes they provide?

We must seriously start talking about decoupling income from work. Adopting a universal basic income, aside from immunizing against the negative effects of automation, also decreases the risks inherent in entrepreneurship, and the sizes of bureaucracies otherwise necessary to boost incomes. It’s for these reasons, it has cross-partisan support, and is even now in the beginning stages of implementation in countries like Switzerland, Finland, and the Netherlands.

Artificial intelligence pioneer Chris Eliasmith, director of the Centre for Theoretical Neuroscience, also warned about the immediate impacts of AI on society in a recent interview with Futurism, “AI is already having a big impact on our economies. . . . My suspicion is that more countries will have to follow Finland’s lead in exploring basic income guarantees for people.”…”